With the opening of the Berlin Brandenburg Airport "Willy Brandt" (BER) in October 2020, the construction of the Tesla Gigafactory in Grünheide and the Microvast battery factory in Ludwigsfelde starting in summer 2020, as well as numerous real estate development projects in the immediate vicinity of the airport, clear signals are being sent for the dawn of a new phase of development for the BER airport region.

What is an airport region?

International airports are important gateways to the world which have the function of ensuring that entire nations and regions can be connected to the full diversity of global exchange. The exchange of knowledge via face-to-face contacts plays a special role here [1]. In fulfilling this function, airports interact with numerous developments within their spatial environs. As well as utilising them, they also exert a range of direct and indirect effects on their environment [2]. Functional spaces are then created, which are referred to as airport regions.

This development has been held back of course by the COVID-19 pandemic, which has particularly affected airlines and airports, but also other supplier industries and municipalities surrounding the airport.

The scenario analysis is based on the following regional setting:

These are oriented towards the regional settings from the overall structural concept for the airport region [3], expanded to include the two regional growth centres of Fürstenwalde and Luckenwalde, the technology location Teltow, the municipality of Grünheide as a Tesla location and the district capital of Lübben as a potential location for science.

Based on the results of a region analysis by TUAS Wildau [4] from 2020, the scenario analysis investigated how the airport region can distinguish itself as a location for science and innovation by 2035, and whether and which options for specialisation in the fields of business and science are possible.

The visions for the future developed in the participatory scenario analysis process, including the associated opportunities and risks, are intended to make regional actors from the fields of science, business and administration aware of the different futures, and to form a foundation stone for deriving strategies to shape the region.

Regional actors are involved in the phases of the scenario analysis process in specific ways. A forum shall be provided to exchange and illustrate different points of view. This shall offer an opportunity to create a common understanding for the future, which in turn will form the basis for coordinated action.

The scenario analysis process is divided into several phases:

The future of the Berlin-Brandenburg airport region as a location for science and innovation in 2035.

The scenario analysis is a participatory process that involves different regional actors in its conception and implementation. The scenario analysis process ranges from a preparatory phase, in which the procedure was agreed and a status quo analysis was carried out, to a joint determination of influential factors and the selection of key factors, the development of future projections in teams and their elaboration by the scenario team, to the development of scenarios and a subsequent backcasting process to elaborate approaches for action.

From future projections to scenarios

The listings in "The BER airport region as a science and innovation location in 2035" present the two scenarios developed - centrally controlled industrialisation and decentralised specialisation bottom-up - described as a narrative and graphically implemented. They represent an important interim result of the scenario analysis. 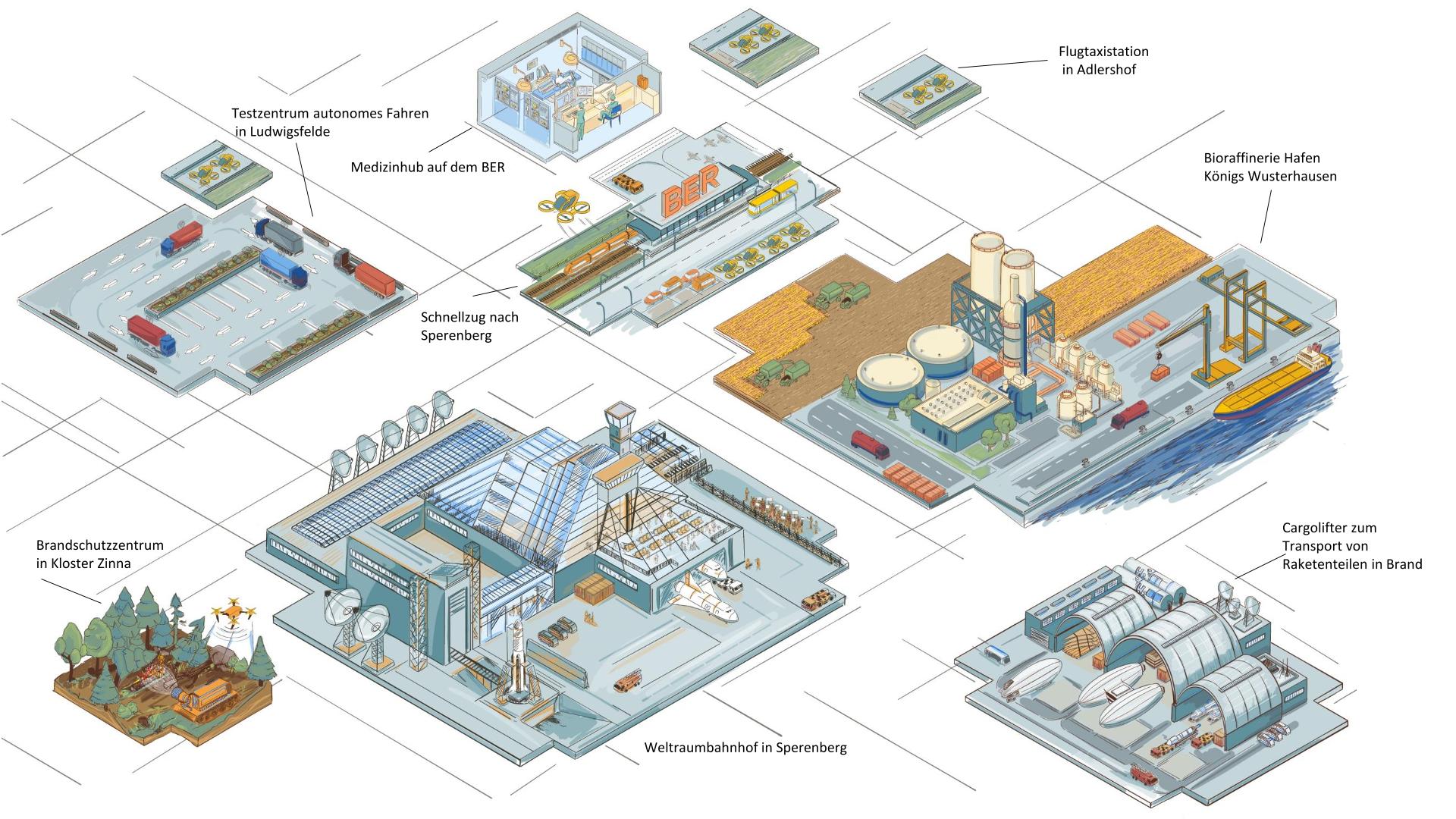 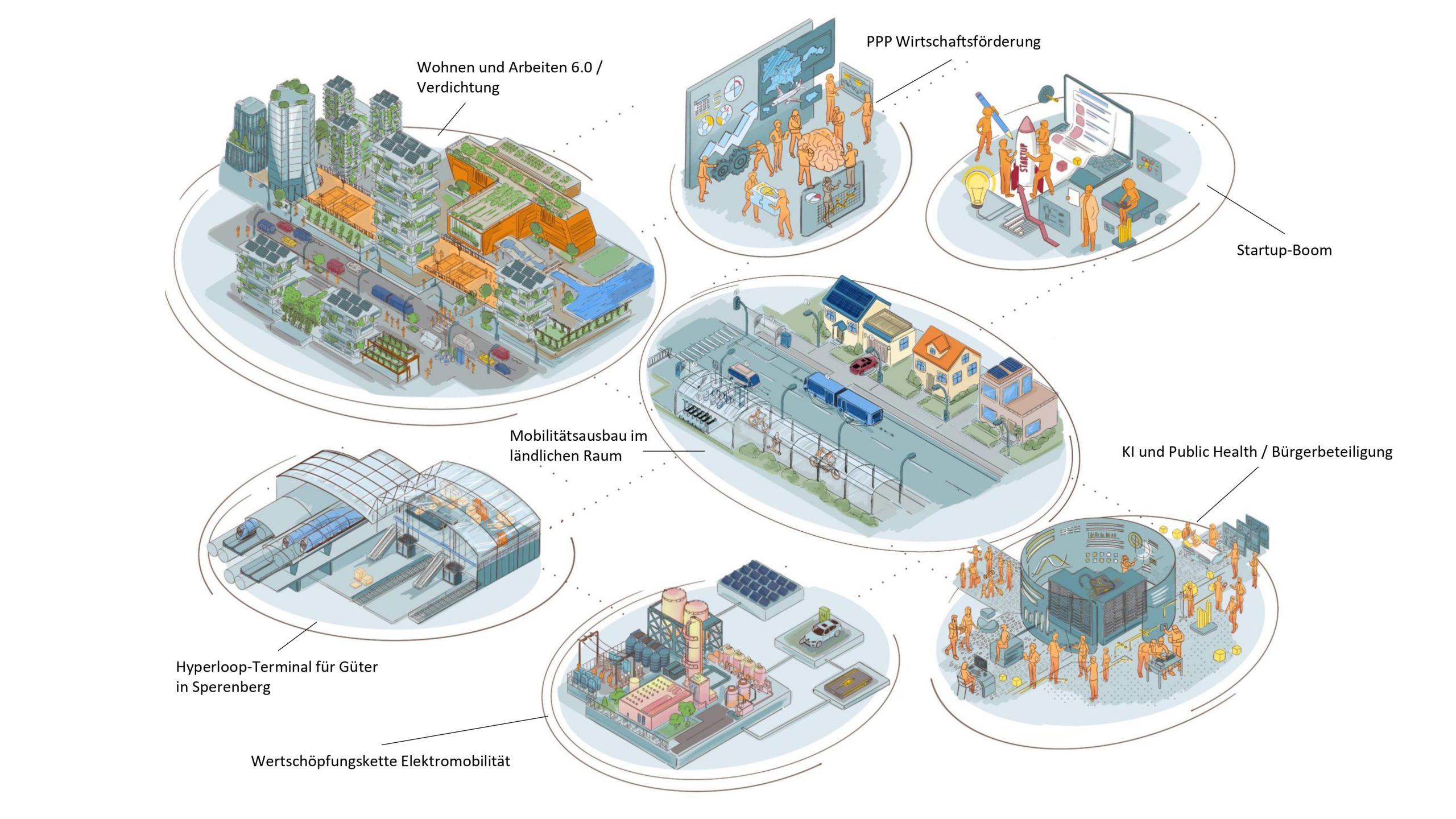 From scenarios to opportunities and risks

Considering these two scenarios, the scenario team determined the opportunities and risks for a desirable future for the airport region as a location for science and innovation. They form a starting point for developing approaches along with regional actors in the subsequent transfer phase of the scenario analysis.

The second scenario analysis workshop on the future of the BER airport region as a science and innovation location took place on October 7, 2021, between 9 a.m. and 1 p.m. at the locations of TUAS Wildau and the Potsdam University of Applied Sciences in Luckenwalde.

Based on the results of the first workshop, in which participants in teams identified factors influencing development, this second workshop focused on the participatory elaboration of future projections. The future projections were again developed in various mixed teams and related to the key factors identified by the Innovation Hub 13 scenario team. The location in Luckenwalde provided a particularly suitable setting for a creative and analogue workshop format. A coworking space, a makerspace and a showroom were all integrated within it. The Innovation Hub 13 foresight team was once again very happy after a considerable time to again seize the opportunity to work on creative solutions together with regional actors on site .

Factors influencing the development of the BER airport region →

Key factors in the development of the BER airport region →

On June 11th, the kick-off workshop “Drivers and Obstacles” took place as a component of the scenario analysis. Remotely and digitally, 28 participants from business, science, local administration, and politics jointly established the factors significantly impacting upon the development of the airport region. The four mixed teams identified more than 200 influencing factors, which were then worked through by the scenario team and presented to the participants again. From the resulting set of influencing factors, key factors were identified by an influence analysis, taking into consideration the influencing factors prioritised by the participants. This then formed a basis for elaborating future projections and scenarios. The following workshop will deal with the joint development of such future projections and will probably take place in September and be open to other interested parties from the region.

To the introductory presentation → 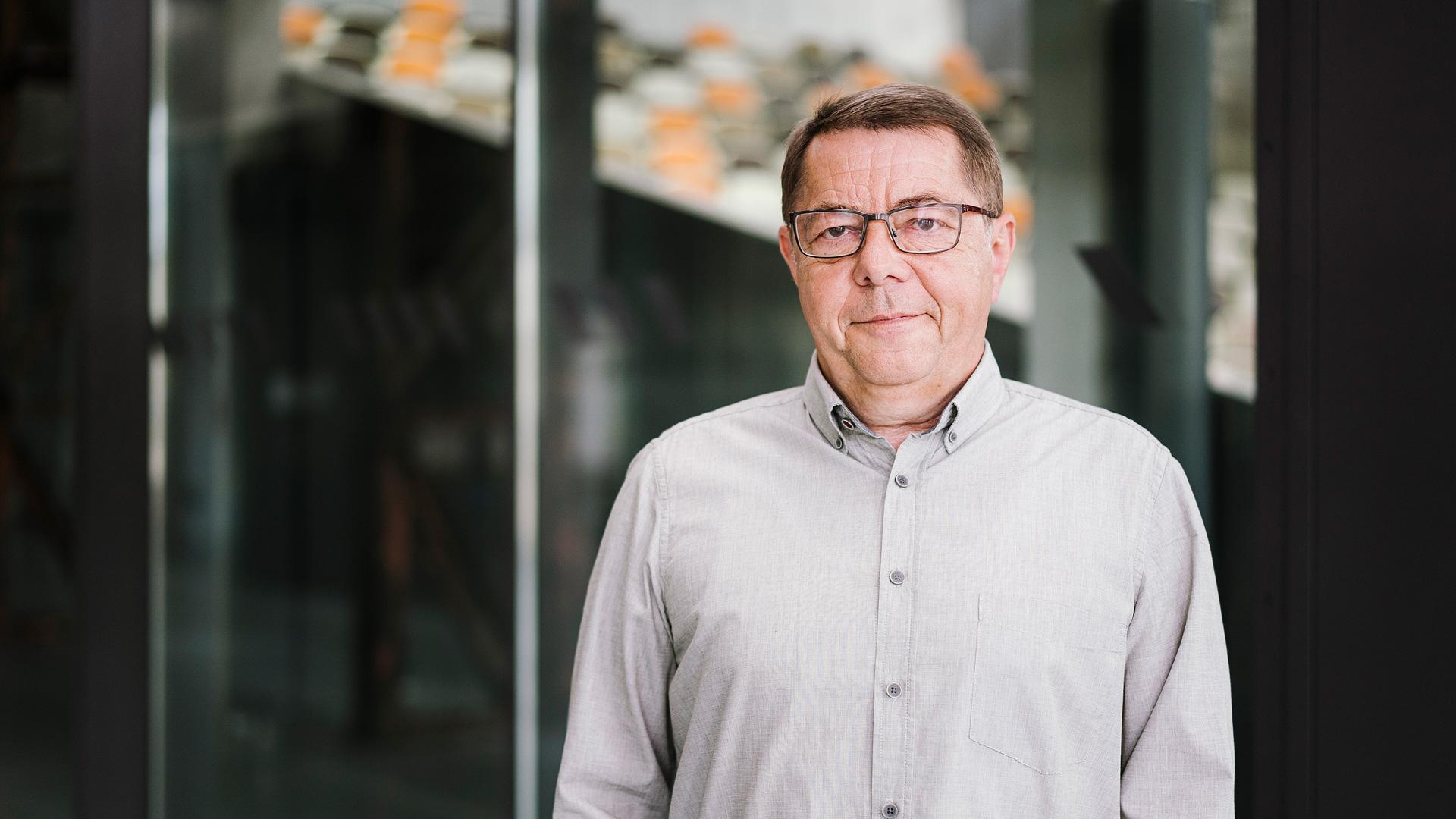 To the digital forum →

Do you have questions, suggestions, ideas or specific projects? We are looking forward to talking to you!

The "Innovation Hub 13 - Fast Track to Transfer" of the Technical University of Wildau and the Brandenburg Technical University of Cottbus-Senftenberg is one of the 29 selected winners of the federal government funding initiative "Innovative College", equipped with funds of the Federal Ministry of Education and Research BMBF And the state of Brandenburg. Further information can be found at www.innovative-hochschule.de